By Focusing in Focus

My article BIOSPRITUAL FOCUSING: A Gift to the Whole Body has been received very positively by many. Thank you all for your feedback. After being translated to French, I received this very exciting news about how far the article travelled already.  My former student and now Coordinator in Hong Kong shared with me recent news about his work with his group on “WhatsApp”

I am happy to share with you the following:

In the past year, a retired professor of Chinese University, Eric Ma, attended my Focusing course as well as the Dreamwork workshops. At first I didn’t know that he used to be a professor in the School of Journalism and Communication of the Chinese University of Hong Kong, specializing in Hong Kong subculture and popular culture. [1] Retired early at the age of 56 [2] [3]. Doctor of Philosophy [4], University of London, United Kingdom. He also wrote a column in the Century Edition of Ming Pao. Author of “The Age of Television Warring States”, “Interpretation of Popular Media” and so on. [5]”

Eric Ma is a writer and has a special column in a popular Chinese newspaper (readers mostly  from educational class) every Sunday with a full-page space.

In the past few months, every week he wrote articles about all the experiential learnings in my classes, in relation to what he already knew and on what I taught about Focusing and dreamwork. Of course, all contents are from what I learned from Dr. Eugene Gendlin through you Nada.

Recently, Eric is bringing up a question in the group for discussion : What was the religious background of Dr. Eugene Gendlin? What did he think about the relationship between Focusing and spirituality ?

“My relation to an ultimate”

Then, I find your following email:

” Dear friends,  A new story has been added to my website NEWS:

BIOSPIRITUAL FOCUSING: A Gift to the Whole Body

Chee Seung shared it with his WhatsApp group. I was delighted to receive this message from Eric Ma:  – small part of it here:

The following is long, just want to share my gratitude. Lots of memories, when I read Nada’s message

[下午2:24, 2020年6月19日] 馬傑偉: I share the same sentiment, of relating to the ultimate, but refrain from saying too specific about religious conviction. …. Not denying my faith but don’t want to say much beyond my empirical experiences . Yes, in my early 20s, I was hurt by religious practices. Big trauma … But I have been very sensitive to the spiritual realms since then. …..I had a peaceful feeling when I watched  Gendlin’s video on cat theology .

Surprisingly, what Nada said is what I have been faintly experienced in the last few years: the ability to bodily (felt sensingly) connect to a God beyond all names does not require a specific religious affiliation. Felt sensing provides “body” to “BODY” connections from which life forward direction comes as a gift. 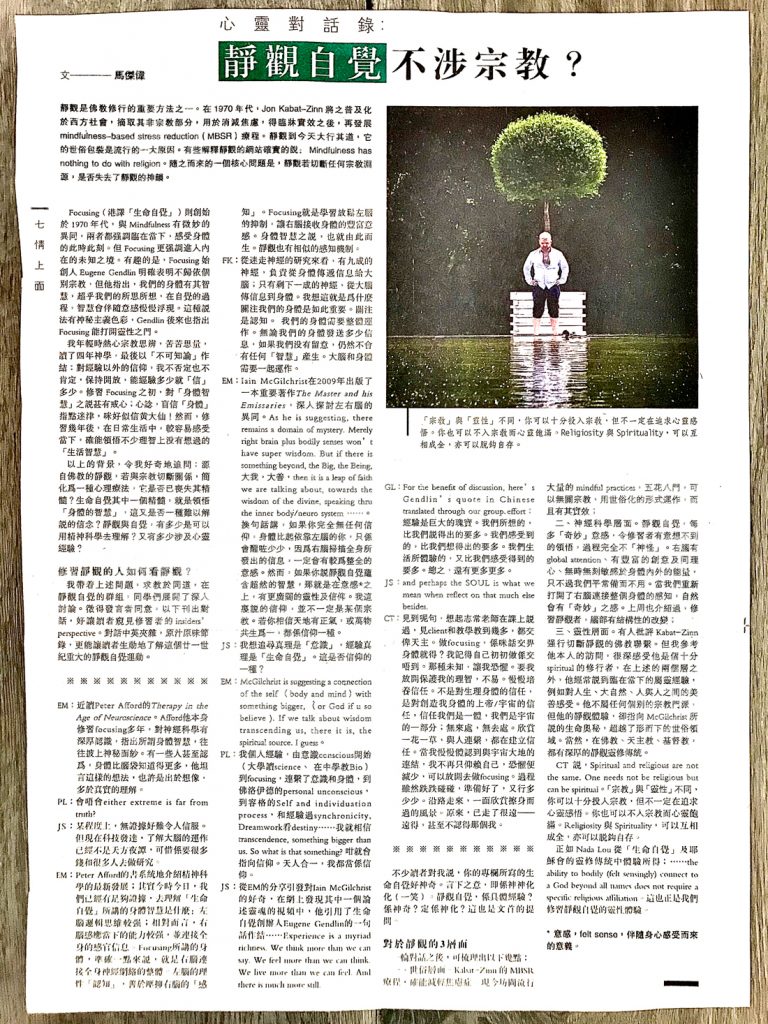 And he included the article which was published in “Ming Pao” daily newspaper last Sunday. (Same should also appeared in “Ming Pao” Chinese newspaper East Canada version the same day) for your reference. He quoted your quotation in English at the end of the article as the conclusion backup.

If you read carefully through the article, you will spot “Peter Afford’s” name too.

About Focusing in Focus

More by Focusing in Focus

CROSSING THE RUBICON into FOCUSING PROFICIENCY

BIOSPRITUAL FOCUSING:   A Gift to the Whole Body